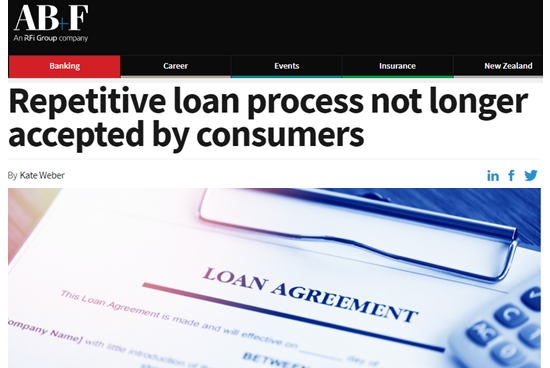 People are no longer willing to wade through lengthy applications now COVID-19 has expanded many digital first processes such as loan applications.

“Something where they can take control of and click on apply now and then they’ve started the process instead of waiting on someone else is the real shift that we’re seeing as well.”

Jones added in light of COVID-19 consumers are being overloaded with empty digital interactions which yield little results.

“To spend half an hour or an hour on the phone providing information verbally to a lending staff member is a big waste of a person’s day.

“When given the opportunity to be able to automatically populate an application in their own time, we’re finding that it is really attractive to customers, which is then making it more efficient for lenders.

“It removes waste, improves credit quality and reduces cost to originate to the lender,” said Jones.

The home loan platform has had a lot of success with this approach with the fintech currently undergoing a convertible note expected to raise up to $500,000.

This would be followed by a $1 million-odd raising before the first quarter of 2021.

“When given the opportunity to be able to automatically populate an application in their own time, we’re finding that it is really attractive to customers, which is then making it more efficient for lenders.”

It is understood the convertible note values Nimo in the $3 million to $5 million range.

Jones said they are hoping to have a price around the next 12 months and are currently ahead of their projections.

Once the raise has finished Jones intends to focus on scaling the company and Nimo are already in the process of hiring additional developers and relationship account managers.

The company is already engaging in the Asian and European markets but Jones said he “absolutely wants to nail the Australian market.”

“We’ve learnt a lot when we’re over in Taipei and talking to the Chinese banks and the Japanese banks.

“We learnt a lot through that late last year. We’ve got some good, interesting conversations occurring in other regions as well.”

Jones stated his time as CEO of a mutual bank helped him identify what gaps were missing in the market.

From managing a broad range of fields from risk, sales, I.T. and manage distribution and product has enable Jones how Nimo needs to function.

“Most of the solutions that we see in the market are either a technology led solution or a credit risk solution.

“But what we do is we bring product and sales into the equation in a balanced way.”

Looking forward, Jones stated voice biometrics could become the new norm when filling in applications and said he is a “massive fan” of the technology.

However, Jones said such capability is still quite some time away as there are other priorities for Nimo first plus consumers may still take a conservative view of the technology.

“Voice biometric for identifying people is dependent on the risk of the transaction that they’re doing.

“If someone just wants to get their credit balance they don’t want to transfer then using voice biometrics is a good, simple, non non-intrusive interaction for a customer.

“So, before we get to voice biometrics, there are a few other layers that we could get right first.”